Zazie has blonde hair and violet eyes. He wore a vest over a beige dress shirt, brown pants, shoes, and a red bandana around his neck.

As Bete he was a kind and normal young boy, but after revealing himself as Zazie, he became cold and uncaring. It's also noted he dispises children.

Zazie the Beast is a collective of sentient hive-minded insects able to control the bodies of humans. These insects are native inhabitants of the planet Gunsmoke, who form an alliance with Knives to determine whether humans or Plants are better to co-exist with. They originally take over the body of a young boy, but it is destroyed by Hoppered the Gauntlet when Hoppered and Midvalley, who plan on betraying the Gung-ho Guns, realize Zazie has been sent to spy on them.

Zazie later reappears in the body of a teenage girl, firing the shot that mortally wounds Hoppered, though she is also disabled by shots from Wolfwood. When the insects witness Knives' progress in assimilating other Plants, they grow fearful that Knives may become a danger to them and attempt to take control of his body. Legato Bluesummers saves Knives, destroying Zazie's second host. Knives recovers and destroys the hive-mind in response.

The last body is an odd-looking man in disco-clothing used to deliver his coin to Vash the Stampede to complete the set. After the hive was destroyed, the last body was liberated from the worm and had no memory of what happened while he was possessed. 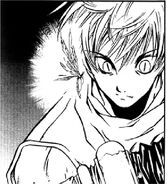 Add a photo to this gallery

The anime features Zazie as Bete, a troubled young boy capable of controlling sand-worms with a high-frequency device he wears on his head. He is killed by Nicholas D. Wolfwood.

The exact nature of Zazie in the anime is never explained. Some believe that he was a dwarf assassin, while others say that he was a kid, and still, others suggest that he might have been the alien.

Retrieved from "https://trigun.fandom.com/wiki/Zazie_the_Beast?oldid=9621"
Community content is available under CC-BY-SA unless otherwise noted.