Start a Wiki
Trigun: Badlands Rumble is a 2010 action/comedy film by Madhouse. 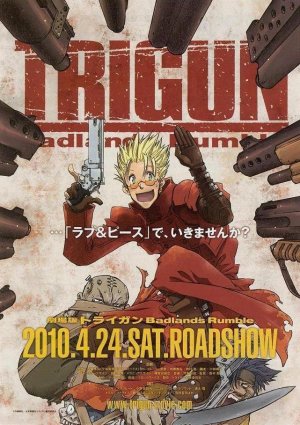 A hulking thief known as Gasback is staging a large-scale bank robbery, along with his three henchman. The hostages are hog-tied in a corner of the room, with one of them remarking that they are lucky its only Gasback robbing them. If it were Vash The Stampede (anime) they would all be dead. Just as the money has been loaded, Gasback's henchmen mutiny, shooting him in the face. They say they are sick of the increasing danger and how Gasback is always using the money for the next hit, so they are going to kill Gasback and retire to a life of luxury. But before the leader Cain can kill him, his gun is suddenly knocked out of his hand. Gasback quickly recovers and proceeds to brutally beat Cain to a pulp. Holding the pleading man at gunpoint, an enraged Gasback plans to kill to pay him back for disgracing his robbery. But before he can do this, Vash appears from under a counter and stuns the robbers with his bizarre behavior and him crying over them ruining his doughnuts. He struggles with Gasback, demanding a "replacement doughnut", allowing the henchman to escape with both the money and their lives. The police arrive, and surround the building just as Vash is revealed to be the infamous 'Humanoid Typhoon." A confused Gasback wonders why Vash would save even robbers, where Vash replies that its better to be alive. Gasback escapes the police using numerous explosives as cover. An unspecified amount of time alter, Vash comes across a newspaper saying he was the mastermind behind the robbery.

Twenty years pass, and Gasback's former henchmen have been living the life of ease they have always wanted. But Gasback returns and takes revenge on one of them, leveling his casino, forcing him to take refuge with Cain. Cain is now mayor of Macca City, and has erected a huge revolving statue of himself with the robbery money. Fearful that Gasback will come for him, he insures the statue for 5 billion double-dollars. This results with Milly Thompson and Meryl Stryfe to come to the city to run risk prevention. They find the city is full to bursting with bounty hunters, and learn from the marshal that Cain has hired bounty hunters instead of bodyguards if Gasback arrives. This upsets Meryl, who realizes it will be very bad for them if the statue is destroyed if a battle breaks out.

Back in the city, Vash is still trying to impress Amelia, resulting him getting beaten to the ground. The two end up in a bar, and share a table with Meryl and Milly. As the night goes on, everyone in the bar gets more and more drunk. This leads to a huge brawl breaking out, and Vash and Milly head for their room,s each carrying an inebriated Amelia and Meryl respectively. As everyone sleeps, Gasback attacks and destroying a factory owned by Gasback's second henchman, forcing him to also stay with Cain. Word spreads that the attack on Macca city is only a hoax, and everyone starts to leave. But Gasbacks arrives early in the morning, stating the robbery will be "quite the show." The bounty hunters, still hungover from the night before, serve as minor annoyances as Gasback plows his way through the city. Upon reaching Cain's doorstep, he is briefly halted by Vash. Wolfwood distracts Vash long enough for Gasback to enter the mansion. At this, Wolfwood states his contract is complete, letting Vash inside. Gasback discovers that Cain has non-fatally shot the other two henchmen, claiming they were the ones at fault. Deaf to Cain's pleas, Gasback is about to get even when Vash and Amelia burst into the room. Vash hopes to settle things peacefully, but Amelia wants Gasback dead. During the conflict, Cain and Gasback escape again and Amelia learns Vash was the one who let Gasback escape 20 years ago. She furiously tells Vash that countless lives where effected by Vash letting Gasback live, swearing to see the outlaw die.

Gasback finds Cain, telling him he does not intend to kill him. Instead, he plans to rob him clean. Gasback sets off a series of explosions that remove the towns light-bulb like power plant from its cradle. It rolls through town and levels that statue (to Meryl and Milly's great dismay) and a special get-away vehicle secures it. The remaining bounty hunters, including Amelia, chase after Gasback. Vash and Wolfwood follow, pulling between Amelia and Gasback's vehicles, trying to stop them from damaging the plant. Vash is suddenly shot by the marshal, shown to be working with Gasback, and the Humanoid Typhoon disappears into a pit of dry quicksand. Wolfwood tries to save him, but only manages to pull out his sunglasses. Grieved over the loss, Amelia wonders whether she is an better then Gasback.

Back at the now powerless town, Amelia tells a stunned Meryl and Milly that Vash is dead. Wolfwood, now wearing Vash's sunglasses, agree to take down Gasback and bring back the plant. They fight bravely, but are quickly overwhelmed by the outlaw's firepower. Suddenly, just as the marshal is about to kill Amelia, his gun is shot out of his hand. Vash appears, much to everyones great surprise. Vash revealed that he lived by having the bullet lodge into an incredible tough piece of smoked meat in his pocket. He avoids drowning in the quicksand by having Milly and Meryl pull him out, much to their shock. Gasback and Vash duel, ending with Gasback getting shot in the leg and shoulder. Gasback tries to activate his trump card, an energy-based weapon, but Amelia counters it with a pair of strange, metallic gloves. A dumbfounded Gasback recognizes the gloves as something he made for his wife. Amelia then reveals that that Gasback's wife was her mother, and she was born shortly after he left for a robbery. While he left his family well-stocked, a rival gang broke in and stole everything. The neighbors only looked on, refusing to help the family of an outlaw. Amelia's mother soon died, as even the doctor wouldn't help them. Amelia then aims her gun at Gasback, but then concludes that she will not kill him. Just then, Cain arrives with a missile, planning on killing all of them except himself. Before he can do this however, Wolfwood destroys the missile with a single shot from his Cross Punisher.

As the end credits roll, the town is restored once the plant it brought back. Vash and Wolfwood encounter Meryl and Milly, who state that since Cain was a criminal under false name, the insurance payment is now null and void. Gasback, Cain, the marshal, and the other henchmen are being taken into custody in a police caravan. Amelia is watching them from a distance, looking on as her father stares thoughtfully out the cells window. Vash and Wolfwood are then seen still walking, discussing the recent events. Wolfwoods brings up the point that if Vash had not saves Gasback 20 years ago, Amelia would never have been born. A newspaper clipping then blows into Vash's face, and upon reading to, says they are going in a new direction. Wolfwoods sees that the paper says the Dodongo Brothers have escaped from prison, and learns that Vash may have something to may have something to do with them.

How not to impress a girl

Wolfwood and Amelia using the Cross Punisher for cover

Vash is back
Add a photo to this gallery
Retrieved from "https://trigun.fandom.com/wiki/Trigun:_Badlands_Rumble?oldid=8296"
Community content is available under CC-BY-SA unless otherwise noted.