A Sandsteamer is large vehicle used for transportation on No-Man's Land. Its appearance is similar to that of a steam locomotive, but several times bigger. Unlike steam locomotives, sand steamers don't travel on rails. Their route changes with the sandy landscape. They carry at least two plants on board. One to produce water, and one to produce heat for the boiler. Presumably, there are more, most likely for electrical production and other basic needs, but none are mentioned in either the manga or anime.

Because of bandits in the desert, sandsteamers are armed with cannons and often escort convoys of cars from one city to another.

The inside of the sandsteamer is more like a cruise ship than a train. The interior includes a casino and a food mart for the passengers.

Sandsteamers come in several styles presumably for use in different environments. 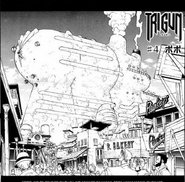 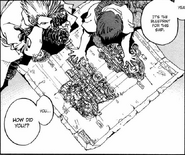 Blueprints of the "Flourish"

The Sandsteamer "Mubra"
Add a photo to this gallery
Retrieved from "https://trigun.fandom.com/wiki/Sandsteamer?oldid=8995"
Community content is available under CC-BY-SA unless otherwise noted.