Milly has a kind heart as well as a strength of character and genuine optimism. Kindness comes to her naturally and she does her best to give it to others, often going out of her way to offer help to those who need it. She is a bit of a crybaby as well and is easily upset over trivial things such as pudding. In the manga, she later has a change in the profession and leaves her job as an insurance agent, working alongside Meryl in No Man's Land Broadcasting.

Milly is an extraordinarily tall woman in a large, canary yellow coat with a green shawl. Underneath, she wears a standard white button-up shirt with a tie, brown slacks, and suspenders. Her hair is dark blonde, long in length, and is kept down.

Throughout most of the manga, Milly sports a different appearance. Her uniform has slight changes: Her hair is light blonde, shorter, and curled, easily reflecting her bubbly personality. Her coat is entirely green with a darker green fringe, and in some illustrations, her coat keeps these same elements but instead is colored in a brown palette. Milly's coat in Trigun: Badlands Rumble is based on her manga design.

She manages to hide a very heavy concussion gun—referred to as a "stun-gun"—under her coat. The shots, which pop out into the shape of an X-shaped claw, are so powerful they can even knock over trucks. The gun weighs 98kg (216lbs).

Meryl and Milly act as opposites of each other; Meryl being pragmatic and direct while Milly is a bit of an airhead. Milly respects Meryl as a colleague and close friend, often consulting her of her problems and encouraging Meryl to move forward and take initiative. At the same time, Milly admits she feels like a burden upon Meryl, and given the opportunity, she tries to make up for it. The two accompany each other always and somehow manage to get out of the worst situations together. They continue to be partners even after the series comes to an end in both the anime and manga.

In the anime, Milly and Wolfwood share a very warm and romantic relationship with each other, made out to contradict Meryl and Vash's stubborn relationship. Milly is always happy to see Wolfwood, and the two enjoy each other's company; eventually openly referring to each other as "dear". When Wolfwood dies, Milly is visibly torn and left sobbing at her bedside. She later recovers and keeps him in her memory fondly.

In the manga, there is no romantic relationship between the two. There is seldom time Vash and Wolfwood actually hang around Meryl and Milly compared to the anime, so the opportunity for a solid relationship isn't presented. Milly is still saddened upon hearing that Wolfwood had "left on a journey" with no telling when he would be back, however, and begins to cry. 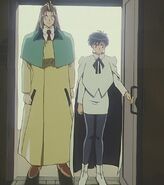 Full body shot of Milly with Meryl in episode 1.

Milly about to use her stun gun on a rude bounty hunter.

Milly with her stun gun-running into action with Meryl in the intro.

Millie tied up with Meryl by some vicious bounty hunters in episode 1.

Millie and Meryl about to jump some Bad Lad gang members to knock them out and steal their uniforms to confront the leader in episode 6.

Millie in the disguise with her stun gun episode 7.

Milly reveals herself under the disguise in episode 7.

Milly sitting in her office uniform with Meryl in episode 24.

Milly embarrassed after haphazardly mining for water in a well in episode 25.

Milly being ordered by her boss to clean windows after being late too many times in episode 19.

Milly on the right in her desert clothing (Hood up) in Badlands Rumble.
Русский
Community content is available under CC-BY-SA unless otherwise noted.
Advertisement