Melca Border Floating Ship the Floating Ship is SEEDS ship located in the Melca Border Sea of Sand and is home to a community of humans whom Vash has befriended throughout his travels. It is likely the only SEEDS ship which survived "The Big Fall" as its ability to maintain anti-gravity caused by surviving plants prevented it from fully crashing into the planet.

The Floating Ship semi-crash landed on the surface of No Man's Land/Gunsmoke during "The Big Fall" in an area known as the Melca Border Sea of Sand. Over the past 150 years, the majority of its residents have remained mostly secluded from the outside world, possessing advanced technology located on the ship which the rest of No Man's Land/Gunsmoke would likely consider "Lost technology." Though it is not directly stated the residents are most likely the descendants of the ship's original inhabitants. At one point the community boasted a population of 480 residents, but following Leonof the Puppet-Master and Grey the Ninelives' attack on the ship, that total has fallen to 310. Vash the Stampede was known to have been brought to the ship sometime before the start of the series and was nursed back to health by the residents following the loss of his arm. Due to this he considers the ship his "home" and returns to it from time to time, several years in between. 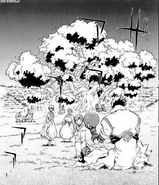 A geo plant within one of the ship's bio-domes.
Add a photo to this gallery
Retrieved from "https://trigun.fandom.com/wiki/Melca_Border_Floating_Ship?oldid=8977"
Community content is available under CC-BY-SA unless otherwise noted.